A girl's life in Delhi's premier college for women.
[By Manika Dhama; she is a Delhi-based media professional.]

I'm lucky to be a Delhi girl. Many women colleges here are considered the best in the country. However, recently there were rumors of converting them to co-ed institutions. While it surely excited men, most feared a decline in the "standards". The co-ed advocates counter-argued that the same sex colleges discourage "healthy interaction" between men and women. It could be true but whether that affected my mental or physical health remains debatable.

You see I'm a product of one of these colleges.

Oh, You Are From Miranda House!

Few years back, when I secured admission in Miranda House, a women college, my parents were more than thrilled. (They don't trust the boys.) The first few days there were spent getting used to seeing too many women all around. The only men were those who dozed behind files in the college office, besides the road-side Romeos outside the entrance.

Some people also tend to confuse women colleges as battle grounds of firebrand feminism where one is instilled with hatred towards anything male. I hate to disappoint but there were no such lessons in Miranda. The college library never displayed titles like Men are from Mars, women are not, so kill them all.

Another battle I had to fight was against being stereotyped. Every college in Delhi is weighed down by its "reputation". You are in this college therefore you are like that. You are in Lady Shri Ram College (LSR) so you are haughty and would not condescend to interact with others. You are in Mata Sundari College so you are clearly the biggest loser on the planet. I was in Miranda House so obviously I would divorce my future-husband within weeks of marriage.

Not surprisingly, trying to escape the stereotypes became a defining part of our college life. But there were long-term consequences, too.

There are many men (and their mommies) afraid of forging matrimonial alliances with women from so-and-so colleges. Such girls are considered "fast"! (Perhaps the men are slow and cannot keep up.) I have heard tales of parents who feared that their darling daughter, by getting enrolled in some uppity girls' college, would become "unmarriageable" because she would not be able to "adjust" in her married home. One could understand their plight. After all, there are fewer things scarier than an opinionated girl. 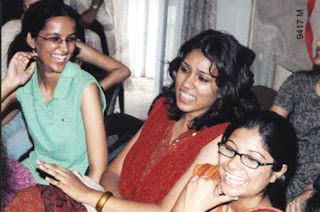 [Manika (extreme left) with friends]
A friend once wished for mixed-sex education so that we could see how men would react to certain lectures. The teacher did not find it exciting. Was it a loss? Perhaps yes. Our classroom discussions often ended up being quite linear because there wasn't a male outlook to add. Whether one would have benefited from these perspectives is not for me to say. But it would most certainly have been different from the experience one had.

But did we miss the boys? Let's confess: the college sans men was no torture and since one could not handpick the boys' one wanted as classmates, it was better to not have them around at all.

Besides, we had a rollicking time. During those three years, our "all women" experience was fun-filled. We were carefree, but also sensible. We never bunked classes. We never ate in the college canteen (the food was bad). But we overused our family cars. We showered more attention on "dramatics" than in academic studies. On more than one occasion we were thrown out of a restaurant for being "too loud".

Okay, we did bemoan the absence of men but didn't miss them very much. True, they hovered in our conversations but they never took center stage of our lives. Perhaps it was good since making fun of them was a lot easier in their absence.

And then, one morning, suddenly we discovered that the college days were over!

In the end (in many ways, the beginning), the college shaped me as an individual but its stereotypes did not define me. Miranda House memories will be cherished for ever.
Posted by Mayank Austen Soofi at 4:44 PM

to start with.... love the picture which introduces the article! i completely agree with you about us having 'linear' discussions in our class room... because (i personally feel) if we had an outlook presented by the opposite sex, (i personally) wouldn't have been as foolishly romantic about the 'fantastic feminism'introduced to us in our initial college days...also some of us who wanted to sway the whole world by the new found ideology...wouldn't have been left to feel disillusioned, inside and outside our college world.Nevertheless i'm still proud to be who i'm and what iam..and have absolutely no regrets for choosing miranda house to study in.

The part about stereotyped girls (and therefore unmarriagable(?)) was an interesting read. I have not mingled enough with DU crowd to know about this. But I do know how easy it is for anyone to get stereotyped based on college anywhere in this country, not just DU. If I tell you I'm from so-and-so engineering college, that becomes a bigger identity than anything else (who cares if you can dribble ball?). Good article.

I went to a co-ed college in DU, for about 7 days. The girls were nothing to write home about. But then what do I know? I am gay. Not that the boys were nice either! Duh!

I appreciate Supriya's insight into the education in 'fantastic feminism' at MH. I would extend this idea to include the comprehensive liberal/radical stance often taken there on a host of issues. My take on this is that while such education is hugely enabling, it is often dispensed with a smugness and short-sightedness that conflicts with the complexity of the world outside. Classrooms in that sense are 'fantastic' vacuumed spaces where the really inconvenient facts like the socio-economic underpinnings of the institution...indeed the academy itself, are never discussed.

Could i have an idea of the hostel in miranda house!!!rd girls decent & is it safe???

m from miranda myself.. was navigated to ur bolg while on my search on 'feminism in colleges' .. the article is interesting indeed.. but must say.. brilliant photography and the themes..

m from mh myself... interesting read.. must say teh photographs and their themes are brilliant...

As a Mirandian...I was forced to navigate through the past.. oh man! I relished the experience!!Thanks to the author...the vivid description given about the typical Miranda life is worth a read.
I agree with the zero men aspect..neva missed those species.Lab sessions,cafe madness,back gate suttas n bantas,PG canteen parathas,the corridors,the fest time..all moments were so special.
good write up

Yeara ago, There was a magazine -City Scan - which was unacannily similar to this blog in its contents, in that rag I read a limerick dedicated to MH..so here goes

A girl from the house of Miranda
did some naughty things on the verandah
when asked to explain
she said "its insane"
anyway, ki farak pendah

Hey great one..you missed one of those tag lines"You r going to Miranda..so you may get caught in the drug loop!" and the other silly punch lines(most likely invented by frustrated boys outside the gates) that in Miranda fresher girls are ragged by making them propose the guard!(As if no other guy exists for proposing...)

There are many men (and their mommies) afraid of forging matrimonial alliances with women from so-and-so colleges. Such girls are considered "fast"! (Perhaps the men are slow and cannot keep up.)

Mayank Austen Soofi, you are literary magic. I can say it over and over again.