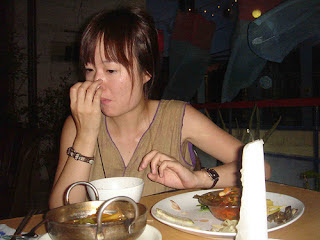 Exploring Paharganj is like entering into a kitschy bubble full of backpackers' hostels, Hebrew-language bookshops, and shabby eateries offering Croissant to Europeans and Humus Pita to Israelis.

From Lasagna Verde to Chateaubriand Steak (rare, medium, or well done), delicacies are priced cheaper here than in the peppy restaurants in Defense Colony and Vasant Vihar. Most of this food is prepared by Nepali cooks who picked foreign recipes from tourists homesick enough to teach their cuisine to the daal-bhaat professionals. Some such ageing hippies opened their own joints- owner of Dokebi Nara, a Korean restaurant, perhaps being one of them.

This little place, accessible only by foot through narrow streets and rickety staircases, was an accidental discovery. Like a smuggler's den, the mood at Dokebi Nara was suffused with mystery. Chinese-style lamps faintly shone on the back of the metal chairs. There was no air-conditioning, no fan, only warm, fetid air coming up from below. The diners were silhouetted in darkness. Behind a bookshelf, stuffed with Korean paperbacks, sat the owner busy playing a card game on his laptop. He had long strands of soft hair jutting out from his chin. He exchanged my greetings with a miffed silence. I decided to call him Kim Jong-il, after the elusive North Korean dictator.

The unfriendly steward asked disbelievingly if I really wanted to have Korean food. I nodded, spotting an empty table. Several hostile eyes peered at me. There was only one menu card in English on which was boldly printed – "We make the food with mineral water." The most expensive dish was priced at a mere Rs. 150! Glancing through the list – Kimchibokumbab, Soojaebi, Jeyook Bokkum and Yachebokkum - I ordered the first one.

Everyone looked Korean. On the next table sat loutish boys roasting fishes on a hot plate. Their bare-chested dress-code and loud hee-haws conjured up images of what I imagined would be Seoul's low life. Soon a hip young couple joined me. They started smooching as soon as they seated themselves. Haa Kumi was travelling in India with boyfriend Kim Gabdol. She conversed in broken English while Kim smoked Shim Te cigarettes. They were not pleased with Delhi but liked Dokebi Nara which they had first heard of in Seoul. "The food is like back home." Kim said. "But Kimchi is strange." Kimchi, a fermented vegetable and fish relish, is eaten at every Korean meal. They complained there was no Chinese cabbage in it and was not spicy enough.

Haa glanced eagerly when my Kimchibokumbab arrived. It was fried rice tossed in Kimchi with a sunny-side-up egg. I clumsily picked the steel chop sticks as the couple suspended lip locking to observe me. Even Mr. Jong-il stared anxiously. I concentrated on the sticks. Ah, it was something new for my taste buds. Kim tried some rice and declared it similar to his mother's cooking. The grains were sticky and soft, he said, and a little sweet. Unfortunately he did not talk much. They were more interested in kissing so I busied myself with handling the chopsticks.

It seemed unreal that I was savoring authentic Korean home-cooking in a discreet Paharganj shack. That the eccentric owner appeared hostile to non-Koreans added to the thrill. Of course, the best thing was the price!

While leaving, curious about his life story, I requested Mr. Jong-il for an interview. "I don't understand English," he said, in perfect English!
Posted by Mayank Austen Soofi at 10:05 AM

And the girl in the photo is Haa Kumi?

Yes, the girl in the picture is Haa Kumi.

Can you please give directions to find this restaurant. I'd love to check out a place like this, eating at over priced foreign food restaurants is getting boring now.

PS: Nepali cooks are the best, i love to eat mo mos from small places all over the city.

Please go to the Main Bazaar. Ask any "native" there about the "Korean hotel". He will be able to guide you. There is a landmark near it which I'm not able to recall but will soon publish the address in the article.

then they complain of delhi belly!

fascinating stuff. also going through some of your other pieces.. the photo essay from Sarojini Nagar was particularly touching.

I write a bit about offbeat eating joints in Delhi myself. Do check out Eating Out in Delhi.

Would love to meet up with you and go exploring some of these places!

Almost all good hotels in paharganj have rooftop restaurants. You should check them out. Also do visit the metropolitan. The italian is quite good. Please post the directions or location of the korean place.