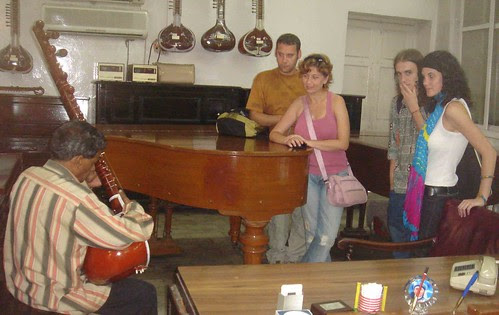 The high ceiling of this charming piano shop seems overwhelmed with the weight of history. Situated at the desolate end of the Regal Cinema building, A. Godin & Co. was established in Quetta in 1900. The founder Celiano Godin, a 25-year-old who played both piano and violin, later opened branches in Bombay, Calcutta, Mussoorie, and Delhi.

Opened originally at Kashmiri Gate in 1940, the Delhi store rapidly earned its prestige. By the time Lord Mountbatten arrived seven years later to cut a bleeding India into pieces, Goldin & Co was reputed enough to be chosen as the official tuner for his pianos. But the partition came with its complications – the British left and Quetta had to be abandoned. The piano trade was no longer lucrative and other stores were shut down leaving the one at Delhi alone to carry on with the legacy. In 1960, Austin Godin, the founder's son, finally bowed to the market demand and opened the doors to selling Indian instruments like sitar and tabla, apart from pianos.

Today the windows are decked with hanging sitars, harmoniums lie arranged on tables and guitars adorn the wall but it's the pianos – Grand and Upright – that makes the atmosphere. Magnificently sprawled over half the showroom, their regal splendor, teakwood dignity and old-world charm suffuses the shop with a kind of elegance that is rare in this mall-crazed city. Rarer still are the talented artists employed to assist the buyers. Sajal Mallick, a piano repairer who inherited the art from his father, effortlessly renders Rabindra Sangeet in a Grand. Visually impaired Ishrat Ali, an employee for the last 30 years, plays a perfect Rag Bhopali in a sitar of your picking.

The company imports around 50 pianos each year from Stuttgart in Germany; the sitars and guitars are Kolkata-made. With the Grand and Upright ranging around Rs 1 lakh and Rs 50, 000 respectively, pianos are also leased out to institutions and private homes (from Rs 1500 – Rs 5000). Grand Hyatt's Grand is rented from here. Elton John once bought an Schiedmayer here; Ravi Shankar and Brian Silas too have shopped here for sitars. Perhaps it's your turn now.

Hello Patricia, it is always nice when The Delhi Walla manages to make somebody feel good. Thank you.
mayank

Thsnks for this trip down memory lane!

Hi Mayank, I too am the founder Celian Godin's granddaughter and Austin Godin's neice and goddaughter. I had the privilege of knowing both Celian and Austin and the fortune of inheriting their musical talent. I have never visited the shop in New Delhi, but my mother, Celian's daughter, Mavis, told me lots about it. I too live in Australia and would love to get in contact with my cousin Patricia. Thanks for your gracious portrayal of the family business. Lalita