Obituary – Searching for Qurratulain Hyder in a City Graveyard

How to mourn the death of an author you never read. 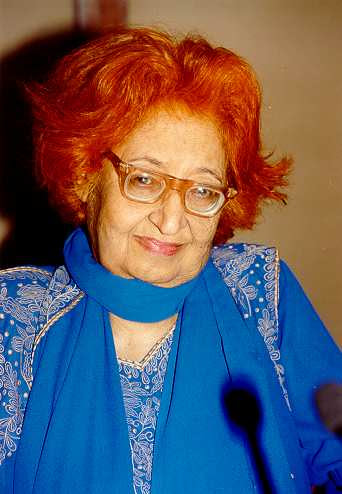 [Text and pictures by Mayank Austen Soofi; Ms. Hyder's photographer could not be traced.]

The hill was alive with the sound of the grave digger's shovel. I was looking for a grave. In the next hill perhaps? It was dug yesterday. For Qurratulain Hyder. She was an Urdu writer who died on August 21, following a prolonged lung ailment, in a hospital in NOIDA, a Delhi suburb. I have never read Ms. Hyder. Yet I came here in Jamia Nagar’s Muslim graveyard to express my sadness at her passing away.

With me was a cutting from today's Times of India. Folded between the pages of an Alice Munro hardbound which I was carrying, it was a 15*9 mm column on Page 2.

An old bearded man in a green kaftan was digging a grave. Could he direct me to where a woman was buried yesterday? An author whose body must have come from NOIDA - I explained to him. Her hair was short; I added hopefully. The man's empty eyes stared back. I moved my gaze to the surrounding hillocks.

Would Ms. Hyder be somewhere there?

Wanting to feel a fellow writer's camaraderie for her, I walked down the hill, stumbled over discarded graves, overgrown grass, hidden hollows, small boulders, and walked up another hill. Two boys were flying kites. Goats scampered around the tombs – no tombstones; merely partially-raised mud platforms.

Reaching the top, I sat under a neem tree, and took out the newspaper cutting from the Alice Munro.

When this great figure of Urdu literature took her last breath, she had no friend or relative with her in the hospital. Her neighbors in Sector 21, where she had been living alone since many years, had no inkling of having close proximity to such a celebrated writer. Hyder had never married.

I re-folded the cutting and kept it back inside. A laborer was climbing down a hill facing me. She was clueless about any author's burial but talked of flowers on a new grave. That was it. I ran up, past a rich man's grave (cemented; shaded by roof; with few lines inscribed in English), and found her – under a fresh mound. Marigold flowers lay at one end. On the other was a bouquet with the note - "From the students and faculty of Indraprastha University."

I kneeled down and took out the newspaper cutting again:

Called "Aainie Aapa" by friends and admirers (where are they?), Hyder's most famous work is Aag Ka Darya, a magnum opus which explores India's history from the fourth century BC to the subcontinent's partition.

Like many contemporaries, Hyder too crossed the border during partition. But the feminist and democrat in her felt uncomfortable in Pakistan. She returned to India in the 1950s, and went on to work in the Illustrated Weekly of India.

For a moment, I looked up, up at the sky. A crow was flying high.

Despite being reserved and even moody, Hyder was not an intellectual snob. "She didn't appear at all as the high-priestess of Urdu fiction," Urdu journalist Mehmood Ayubi recalls.

Taking a handful of mud from Hyder's grave, I clutched it in my hands as it escaped. The newspaper cutting, lying on the ground, blew away with the breeze. I could not feel sentimental, as I had hoped.

My thoughts went to my reading life. How fortunate to feel at home with England's Jane Austen, America's Maya Angelou, and Canada's Margaret Atwood. These are places I have never visited; cultures I have never encountered. Yet, they are so familiar. But how did I fail to read this author who belonged to the land I was born in? Ms. Hyder was, like me, from Uttar Pradesh. We probably ate the same arhar daal, smelled the same heeng and ate the same rotis. Both of us were of the same mitti. Now she is dead and I haven't read her yet. I should be in mourning. It's my loss. 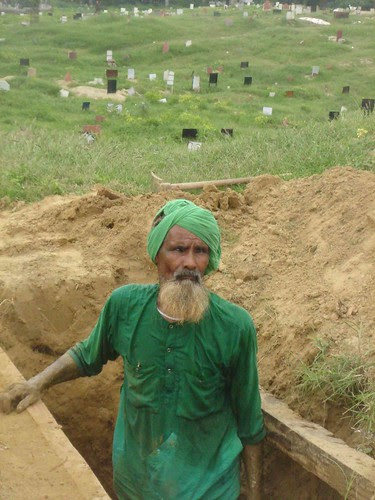 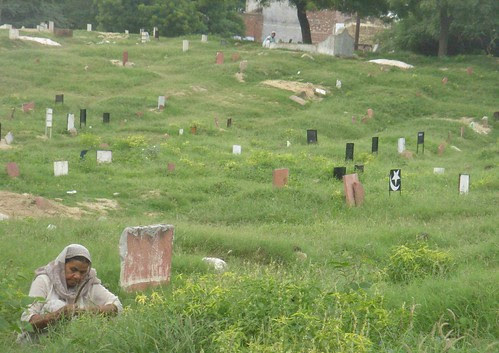 I Will Never Have a Tomb 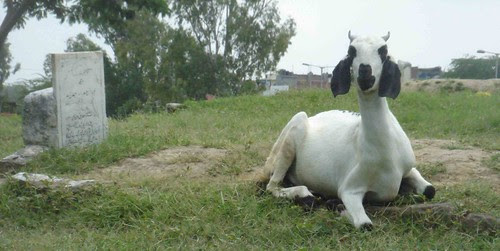 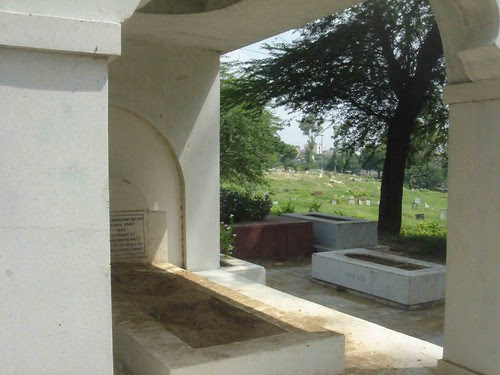 In Memory of Ms. Hyder 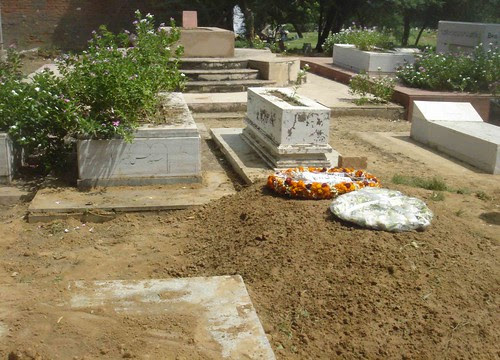 beautiful! i love the grave digger's photo :) you are right, it is our loss

...it's really admirable that you went to the graveyard. shocking that there was nobody with her in hospital.

the photos are great. had i been in delhi i would have surely attended the last ries. the photo of namaz-e-janaza, i had seen, and there was a crowd in that photo though...

of course, these days neighbours don't care. regarding a renowned writer died recently, even his family members were not aware of his stature...and appeared shocked when told about his standing...

people going to the house were never aware that such a man existed in one of the rooms of the big house. the daughter runs a hospital and has no idea what her father did in languages not known to her.

the man, Saraswati Saran Kaif, who had written 60 books in Urdu, Persian, Sanskrit, Hindi and French hadn't written in English. He left behind a personal collection of 5000 rare books.

.. some would say...oh my god...we went to that house and never knew an old man existed there...he died a few weeks back...

Mayank
thanks for this lovely piece - even though you had not read her works (and I strongly suggest that you do that), you made all this effort.

I have vicariously been to the graveyard and through your lens, paid my respects to the great lady who is very special to me and my inner world..

Please also do some follow up pieces when you get the time. Why not go to her house and take some pics of what's there inside..emptiness also says a lot...

a very nice piece...the fact that though you found yourself at her grave, your connection to her was that newspaper cutting. perhaps it flew away so you could begin to discover other connections.
i found myself nodding in agreement at references to the english, american and other writers that one feels so 'connected' to and those from our land whom one can't even begin to mourn for.

Madame Hyder scribbled in Urdu;
I can't read it, how about you?
Was it a writer or a 'celebrity'
Whose grave in Delhi you went to see,
If the latter, why boo-hoo?

yes!i have read with a heavy heart the obituary of ainee apa posted by delhiwala.as it is said death is the ultimate leveller.it leaves no one.the grave as well as the grave diggers are the realities of life.i am pained at the lonely death of ainee apa.but these r the tragic realities which we have to swallow.such a great writer & dying in such a manner reflects on our values & ways of life.
but the writer has touched me by his inability to read her ,i will add in original.but she wrote in urdu a language whch is a victim of linguicide in free india.it is not taught at primary & secondary levels in any govt school after mid augast 1947 a great achievement of the first cm in up;in bihar it is being killed by other means.nonavailability of text books( a prerogative of the state govt only )in urdu .in most of the schools following rhe cbse ,the icse courses it is not taught at all.so is the case with the central schools.this in spite iof beating the drum of democracy & secularism shows the real face of the central & state govts as far as this language is concerned.no wonder our young generation is getting deculturalized day by day.but who cares?.
thank u for writing such a moving piece on the sad demise of this all time great fiction writer.do write an obituary on the death & wanton destruction of a living language & culture.yrs in god arman najmi address:pili kothi.mohalla baqargunj.patna 800004.
email id armannajmi@gmail.com

I plan to ready her. I hope I shall be able to read her in original Urdu, in Urdu letters.

Thanks for sharing your experience! Qurratul-ain Hyder was a flame for many.... Her 'aag ka darya' is brilliantly written. Life in my veins....

I agree with Raza, why not do a follow-up of her home.. take some photos and relay to those who valued her words and life. In that decorum of photgraphing, you may find another layer.