Two days after 9/11, at around half past six, I was browsing at Khan Market's Bahri Booksellers when Mr M Singh, the bookshop assistant, cried out that Delhi has been hit by serial bomb blasts.

Kahan? Where? Kitne mare? How many dead?

In Central Park. Just opposite Gate No. 1 of Palika Bazar. Another, next to the metro station at Barakhamba. One more at Ghaffar Market in Karol Bagh. Ek aur at M-Block Market in GK-I. And…a breaking news on TV by Delhi Mayor Ms Arti Mehra – “A very recent blast inside Palika Bazar.”

People have died. Many have been injured. More will die.

TV channels are beaming images out of Central Park - injured bodies of young people being carried by cops and by-standers to ambulances. These are couples who come here to have good time.

An unexploded bomb has also been discovered in Children's Park, near India Gate. Another bomb has been defused outside Regal cinema (I saw Om Shanti Om there).

According to Delhi Police, the blasts seem to be coordinated. CNN-IBN news channel has claimed to receive an e-mail from an organization that says, "In the name of Allah, Indian Mujahedeen strikes back once more. ... Do whatever you can. Stop us if you can."

NDTV news channel has described the bomb site of M-Block Market as a place “which is a shopping destination, not for the middle class or lower middle class, but for the Capital’s upper crust folks.” Very Delhi.

Actually, there is nothing shocking about 9/13. Indian cities keep rattling with blasts and Delhi had it coming, sooner or later.

A gentleman, next to me, shook his head and said, “Arre, tch, tch.” One white shopper looked down mournfully on the floor. A boy who was carrying William Dalrymple's The Last Mughal swiftly took out his mobile phone and hurriedly dialed a number. But soon after he blurted that the phone lines were busy and he was unable to reach his brother. Addressing us as if we were his close friends, he said that his brother works in Connaught Place and commutes in the Metro. He was panicky. One gentleman consoled by saying that there were 13 million people in Delhi.

Meanwhile a hysterical woman exclaimed that more than 50 people have been killed in the attacks. (This was wrong information; at the time of writing this piece, the total number of dead stands at 18.)

It was time to board the bus back home.

The bus was stopped for security checks at two police barricades. Most commuters were discussing the blasts. The man sitting in front said, “India should bomb every Muslim country and wipe off the problem for once and for all.” There were different interpretations and different statistics as to the number of dead and wounded people. A debate started.

After reaching home safely, I have decided to donate blood tomorrow at Ram Manohar Lohiya Hospital.

However, tonight, like many Delhi wallas, I have a gut feeling that one evening it would be my turn too. 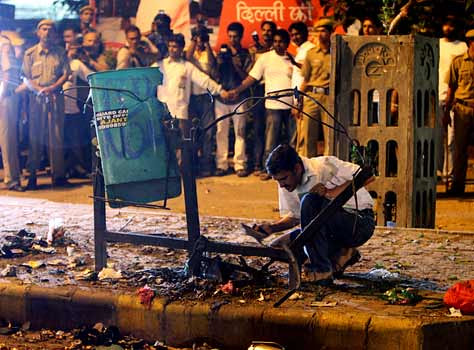 it's gna be our turn one day or the other..n stuff like this makes you feel that you'll end up dying on the streets in a pool of blood in the middle of a war you never even wanted in the first place rather than dying peacefully on your bed when your done with living your own life with your ow problems and wars...

It could be our turn.
Mumbai could be next.
It's like a game. I call you up and ask if you are fine. Then you call me up and ask if I am alive. And we chuckle for a while, till the next event.

Terrible news. My sincere condolence to the victims' families and the people of New Dehli.

ah, my heart aches for my home of the past year. even one death is too much. i pray for peace.

What could we do?

1. Remain vigilant and report suspicious objects/persons at once.

2. Use tools like the Right to Information (RTI) Act to find out about the measures being taken by the administration to improve security, besides publicising security lapses when we come across any.

3. Stop voting for parties that incite, promote and/or actually organise communal violence in the form of riots, so that there is no incentive for these parties to organise such violence in the future. That can, in turn, prevent terrorists from getting local support in the name of extracting 'revenge' for the communal riots.

4. Campaign for the perpetrators of communal riots/bomb-blasts to be brought to justice at the earliest possible, so that, once again, the number of local recruits available to terrorist organisations can be reduced.

its really sad to know about the delhi bomblasts especially when one is far away from their homeland...poignant

I live across the road from M Block Market in GK1, and was there inside a store when the blasts occurred.
For an Indian city, I have to admit I was impressed with the evacuation carried out by the Delhi Police in 5 minutes straight, so nobody was killed at least in this market when the second bomb went off.
The public co operated, and, as I'm sure by now everyone's seen on tv, it wasn't quite every man for himself yesterday. People did help people, which is heartening to witness.
BUT, what if they were higher intensity bombs? What if, instead of 30, it was 300 dead today?
The government would've made the exact statements they're doing now, isn't it? For one, I wouldn't be writing this right now.
Guess we'll all die, but another day. And fuck all terrorist blokes!!

Mayank and all people in Delhi, it is so saddening and unnerving to read about one blast after another, in such quick succession - it is as though we have not even had time to recover from one blast before the next one hits us.

Prashansa Taneja said...
This comment has been removed by the author.
4:38 PM

It is really sad to know that serial blasts have visited Delhi at a time when India faces some tough time in Kashmir. I am not sure if these bombs were exploded by frustrated men who wanted revenge on Kashmir. Or was it some other bigoted reason. But I am sure in all such actions civilians, having no policy at hand, die. And that is the real concern. In Pakistan we see it on weekly basis and the suicide bombings are becoming far too many back home. They always tend to kill normal citizens.

As a Muslim I strongly condemn all such acts of aggression and hope that Delhi police would find the culprits and bring them to Justice.

after completeing a shooting-schedule in thailand....i was travelling in taxi crossing juhu circle...there was high tight security at airport and all the way...i asked taxi driver for FM...as i wanto listen hindi songs...he refused and we went ahead...i reached home and my roommate came back from office...he informed me that there is some breaking news was coming abt delhi that police has defused few bombs...i wento bathroom and aft making me fresh came back...he again informed me that in fact serial bomb blasts happened in delhi...delhi is my birth place and cudnt visit there for past 1 year...but i have same love and affection abt this city...when i left it 4 years before...i read the news in newspapers later on and my one more friend said that there is an email went from mumbai to delhi abt the bomb blast plans....today morning i read email from Mayank...and it made me to write something...anything...dont know wat...i m really missing delhi ...expect the things will be right and even.. soon...not just for delhi..but for whole world...soon we will be millitant-free world.

hey i was thr when the blasts happened, right o/s palika. violence is, as Amitav Ghosh puts it, perhaps one of the harsh realities of contemporary existence

Saif
It's a tragedy that's repeating itself so often. It once again proves the point that terrorists have no religion.

But you guys must not forget that the general public can be bigoted too. Some months back I was traveling by public bus from south Mumbai to the suburbs. The bus was filled with hindu worshipers who were returning from a well known mumbai temple. at a stop at mahim a group of burqa-clad muslim ladies entered the bus. I was shocked to see these religious devotees start to molest the women. I looked around to see if they were doing this to every female on the bus, but no it seems they were specifically targeting the muslim ladies only. I started listening to what they were saying attentively and what i heard confirmed it. They were egging each other on by words like 'dabao musallmaniyon ko, kya mazadar maal hai, nikalo inka burqa, nangi karo saaliyon ko'. The bus was filled with people everybody saw what was happening, but no body did a thing to stop it. On the contrary they watched and enjoyed it, smiling and supporting the molesters with ' hmm, aahhh, aahaa, wowww'. The molesters now assured that they have full support of the fellow passengers soon got to rubbing their hands and 'other' body parts on the boobs & asses of the muslim ladies. The one muslimah standing next to me who easily was the most fair & luscious of them got the most of the massage treatment & if I am not exaggerating it i am pretty sure one guy actually put his hand inside her kameez & unhooked her bra. Now you guys decide for your self how this reflects on ht hindu community especially after the famous rapes of the 2002 Gujarat riots. please comment.