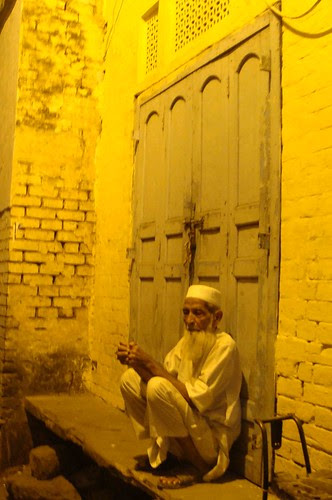 The soul of Delhi.

The Delhi Walla has often been accused of focusing too much on dargahs and tombs. Doesn’t Delhi also boast of actors, activists, writers, singers, museums, bazaars, malls, gardens, temples, colleges, besides various nagars, puris and baghs.

The city has all this and more.

There are suburban apartments in the east taken over by honest, hardworking tax-payers. The squalor of the west has been somewhat rescued by its first-world malls coupled with an extensive metro rail network. In the north, the young, hopeful campus life of Delhi University runs parallel to the old, sad, genteel world of Civil Lines bungalows. In the Capital’s central district, the touristy charm is ably captured by the Red Fort and Connaught Place. While everything that translates to glamour, style, and wealth falls in the kitty of the dishy crowd of the south.

The Nizamuddin Basti, so often considered a filthy Muslim ghetto, is the epitome of this world. And the heart of the Basti is the Dargah of Hazrat Nizamuddin Auliya – inviting, calm, tranquil and lovely.

To those Delhi wallas who have never visited this part of the city -- there are many -- the Delhi Walla recommends that they must set out immediately for the excursion.

You might have shopped in Karol Bagh, clicked photographs in Qutb Minar, performed namaz in Jama Masjid, and might have even read William Dalrymple’s City of Djinns, but if you haven’t visited Hazrat Nizamuddin Dargah yet, you haven’t experienced Delhi.

Tourist spotting, in a Basti bylane 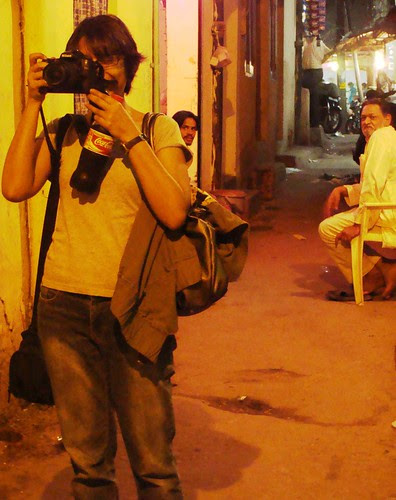 Someone's praying, in a Basti mosque 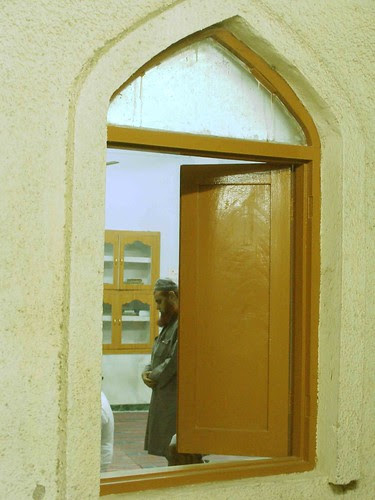 Someone's praying, in the Dargah courtyard 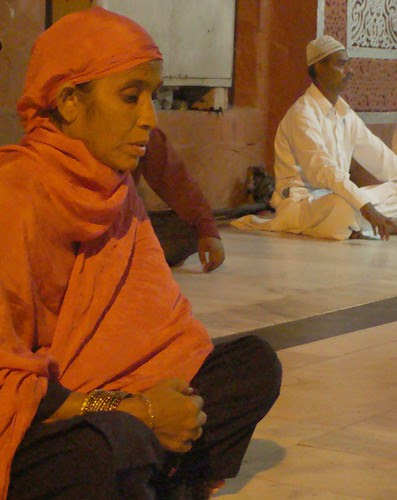 Someone's praying, at the shrine of Hazrat Nizamuddin 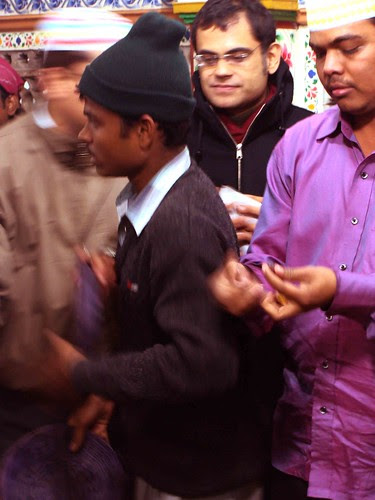 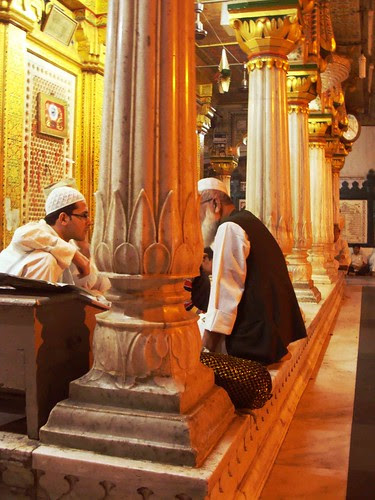 City of djinns, at Jahanara's tomb 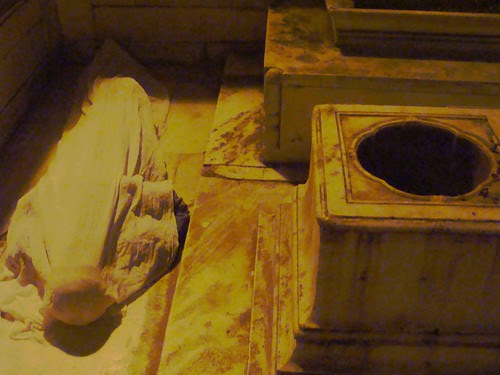 Khilji Masjid, inside the Dargah 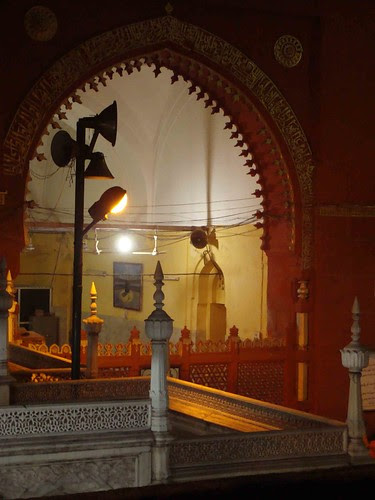 Sukoon, while listening to the Dargah qawwali 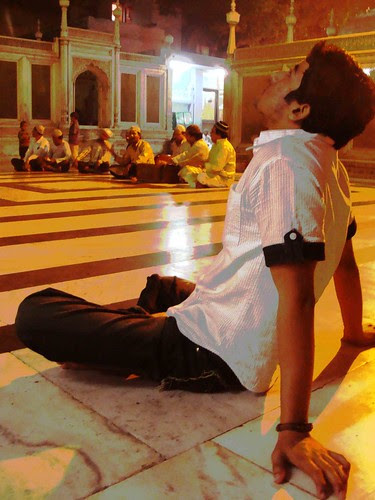 Posted by Mayank Austen Soofi at 12:17 AM

thanks for the visual trip. Have been there during the day. Haven't yet experienced the evening qwaali. We visit Delhi in December. Are there any accompanied tours in the evening? I doubt if any in my family want to accompany me and not sure about safety of females on own in the evenings...

Yes, thats what Delhi meant to me too when I was there.

But then others pointed out that I was living in a time warp; and I suspect it also had much to do with reading Ahmed Ali's Twilight in Delhi.

But then these stories need to be told and I'm glad you are doing that.

I have been following your Blog "The Delhi Walla" for a long time, but haven't commented on it till now.

I have observed that you have been painting Delhi as the City of Hermits, Mystics, Tombs, Dargahs, Ghalib, Graveyards, Eunuches Ghettos, Sufi Saints and other historical monumnets. Well Kudos to you for that. Its always refreshing and informative to read about so many little wonders that we have in Delhi, that most of us usually ignore in our hectic and robotic lives of today.

But I have lots of questions to ask. Why do you portray Delhi as a Predominantly Islamic City, that to a regressive one?(are all Delhi Muslims Skull Capped, Bearded, Shalvar Kurta Clad people living in Ghettos. Well the fact is, many of them have moved with time and are as progressive as any Westerner).

Now if U think that I'm a Right Winged Hindutva Activist, then perish the thought. Though I'm a Born Hindu, I respect all religions equally, after all they are paths to the Almighty. And I'm not one of those Pseudo Seculars of Kaangres (Congress) or Samajwadi Party. My question to you is - The Delhi of today has become India's most Cosmopolitan City (almost at par with Mumbai). Delhi is a melting pot of various religions, cultures, creeds, ethnicities, socio - economic backgrounds and also nationalities.

Delhi is not just about the Muslim community living in the Walled City, Nizamuddin, Seelampur & Jamia Nagar. Delhi is also about the Punjabis of Lajpat Nagar, Pitampura, Karol Bagh, Kalkaji & Greatet Kailash. The Sikhs of Rajouri Garden, Paschim Vihar and Hargobind Enclave. The Bengalis of Chittaranjan Park. The Sindhis of Mayfair Gardens. The Kashmiris of Pamposh Colony. The Malyaalis of RK Puram. The Tamilians of Mayur Vihar Phase - I. The Gujjars of Badarpur and Rajokri. The small town students living in North Campus. The Expatriate community of Chanakyapuri. The Firang Tourists of Paharganj. The Super Rich of Vasant Vihar, Defence Colony, Sainik Farms, Panscheel and Prithvi Raj Road. The Pirated CD & DVD sellers of Palika Baazar & Nehru Place. The Smuggled Electronic Goods Heaven - Gaffar Market and not to forget, the BPO Crowd of Malviya Nagar, Satya Niketan & Khirki. As a Self-Proclaimed True Delhi Walla, Why have you never written about them Mayank.

Jama Masjid and Nizam-ud-din Dargah aren't the only pious and holy places in the city. There are also Bangla Saheb, Sis Ganj Sahib and Moti Bagh Gurudwaras. The Dar-e-Meher (Delhi's Only Parsi Fire Temple). Laddakh Buddha Vihar near Red Fort. St. James Church and Sacred Heart Cathedral and of course the Lakshmi Narayan Mandir, Hanuman Mandir of Baba Kharak Singh Marg, Jhandewaala Mandir, Maata Ka Mandir of New Friends Colony, The Akshardhaam Mandir & The Chattarpur Mandir. As a Self-Proclaimed True Delhi Walla, Why have you never written about them Mayank.

Food in Delhi is not just about the Nahris, Kormas & Biryaanis of Jama Masjid area. Its also about the Chole Bhature of Chachas in Kamla Nagar, the Dosas of Sagar Ratna, the Pastries and other Confectioneries of Wengers, the Kathi Rolls of Nizams, The Mughlai Parathas and Chops of CR Park, the Tandoori Chicken of Galina, the Chicken Tikka Masala of Moti Mahal, the various Chaats and Parathas of Chandni Chowk, the Shawarmas of New Friends Colony, the Hot Chocolate Fudge of Nirulas and above all - the Dal Makhni of Bukhara. As a Self-Proclaimed True Delhi Walla, Why have you never written about them Mayank.
Now I haven't done any reasearch on it, as a True Dilli Wallah, I'm familiar with every Gastronomical Delight my great city has to offer.

Instead of Celebrating Delhi's Diversity and Cosmopolitan soul, you project Delhi as a Underdeveloped City of a some not so prosperous members of a Particular community. I guess either you are deliberately doing this, or you are a Hoax Delhiwallah (Someone whose in the city for just 5 to 6 years and hence has very little knowledge of the city).

While you constantly updated us with the goings on during the Ramzan, finally leading up to Eid (complete with some excellent pictures) I never find you talking about the various other Festivals that are celebrated in Delhi by lot more people. You never wrote about Janmashtami, you hardly covered the Durga Puja Pandals & Dussehra, nothing about Pongal and Onam, no Easter and Christmas and no Baisakhi and Gurupurab.

What agitated me the most is today, one the eve of The Festival, thats perhaps a Festival that defines the Greatness of Delhi and that also Rhymes with its name, yes DIWALI, instead of writing about it, you again wrote about another Ghetto and about the Muslims (only the Regressive Muslims).

If you love so much writing about Muslims, why not write about the Progressive Muslims that have made Delhi Proud - Ustad Amjad Ali Khan, Sufi Singer Zila Khan, Sitar Player Shujaat Khan, Fashion Designer Nida Mahmood, Cultural Colossus Muzaffar Ali, Theater Maestro Aamir Raza Hussain, Disability Activist Javed Abidi and the Bollywood Icon - Shah Rukh Khan. In your Blog, you are only stereotyping Muslims as Hapless and Medieval People. If you love them so much, then why not talk about the achievments of the names I mentioned above and other Muslims of Delhi who have helped made the City an Enigma it is.

Like Ganesh Chathurthi is for Mumbai and Durga Pooja is for Kolkatta, Diwali is for Delhi. Its not just a Festival of a particular ethnic group. Its a Festival loved and celebarted by all irrespective of their cultural background.

Diwali is not just another Occasion or a Festival, its actually Celebrating Life and ignoring all forms of mental trauma and pain for a few days. It's not just about joy, splendor and happiness but also about ushering brightness, smile and spirituality in our lives. (Something that is dwindling from our quota every day.)

It would have been great to get a Blog from you on Diwali, coz your writings are so good.

I wish you start to write about various things that makes Delhi the Melting Pot of Cultures.

And yes, for your kind info Nizamuddin is not the Soul of Delhi. The True Soul of the city is, the one the lies right in its heart and where almost every Delhiite is familiar with - Connaught Place. I'm sure all True Delhiwallahs will agree with me on that.

Anywas Mayank Austen Soofi, I wish you, your team at HT and all readers of this Blog, a Very Happy & Prosperous Diwali.

A writer has every right to choose his subjects and a reader.....his blogs.

Their is NGO in Nizamuddin Basti who also takes walk in the basti too, its is best to take visit with their guides, their are all from local and give first hand information. if any buddy interested for Basti walk just call at Hope Project Charitable Trust(NGO)
ph. 011-24357081, 24356576,24353006.or visit their site www.hopeprojectindia.org.