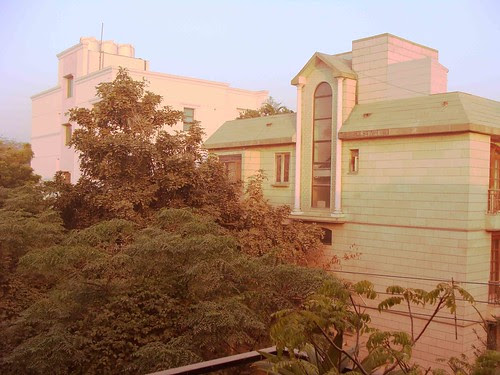 I loved the Delhi Walla’s The Cost of Living piece which had haunting images of a woman beggar and her infant daughter; I wished it could have been longer.

In the article, The Delhi Walla mentions the millionaires but does not pass judgment on them (except tacitly). Instead, the expats come in for their usual lashing. He observes, “At least the expats have their dollars, euros and return tickets.”

Who are these ‘expats’? They are not a homogenous bunch. The difference, say, in earnings of an expat diplomat and an expat journalist is huge. But the difference is academic ... wealth is wealth.

Nevertheless I think that The Delhi Walla has an image in his mind of what an expat is and nothing seems to change that. He seems to mention them with scorn.

I am an expat but I do not go to embassy parties. I have no dollars or euros or pounds. I have five kameez and three salwars. I have no chauffeur-driven car. I cook my own meals. A woman comes three times a week to clean and, I am sure, she is paid far beyond what the millionaires are paying.

Back in my home country, I support, either fully or partly, seven other people. By partly I mean that they rely on that money and would battle without it. I also send money to my mother and sister.

I am helping support a refugee from central Africa who helps other refugees. I send money to a Congolese refugee family who has a son with cerebral palsy. I help a Zimbabwean refugee and her two children.

In July, 2009, I paid the medical bills for a woman, here in Delhi, whose child had been born with a deformed limb. And also for a man who was injured in a motorbike accident. I also give frequent help to the chowkidar of our former flat.

All expats are not alike. I am lucky to live in this house because I got it at a good rent (cheaper than Greater Kailash!) and the company helps pay it. If I did not accept the rent money I could not retrieve it in cash.

Compared to others my lifestyle might be considered lavish but I do not shy away from giving. I have more access to credit than many others. I have good health and clean drinking water.

The challenge of The Cost of Living article is not who earns what but what people do with their money. What can you or I do to ease the burden of that woman in those pictures?

[The author lives in South Delhi]

What can you do for them? 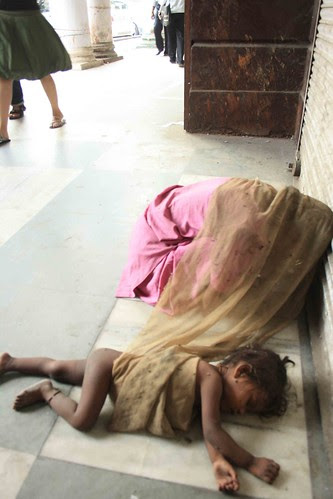 Posted by Mayank Austen Soofi at 11:51 AM

Dear Expat Millionaire of Greater Kailash. All the problems you mention are real and they are problems experienced by rich and poor alike. I admire you for coming by your money through hard work and imagination. I hope you will know that stewardship and not ownership is what counts ... how you use your money. To say that the natives "do not deserve it" misses the point. Who deserves to be poor? The little girl in the photo? I lord you for giving to dogs and you will also feed your soul by giving to human beings.

We all have our problems to deal with. We all have a right to be wealthy. We all have a right to go to expensive restaurants, order expensive wines, and have expensive food. No one can attack us, expats or not, from going to Khan Market and buying imported Cheddar and Camembert. We will not be called criminals if we end up spending all our fortune on ourselves. But is that the only way of using our wealth? Great piece, Anonymous.
ps: I'm an expat. I live in Lajpat Nagar. I have no car.

Rich is relative. I can see why I might be viewed as rich by many a Delhi wallah. I accept that I am much richer than they but I would never class myself as "the rich".

In fact I do not class myself as "expat". I hate the term and I hate being labeled like that. I do not have savings, or a car, or own property. I don't have an iPhone or go ski-ing or snort cocaine or have a yacht or a swimming pool. In my own country I would certainly be classed as nothing more than middle class, if that.

Some of the areas of Delhi that are lorded as beautiful, "expat" and "rich" would pale into insignificance against the mansions of Westport, Belgravia or Cape Town. My two-bedroomed South Delhi home with its awful peach-coloured paint and its dangerous wiring, ancient plumbing and aging, grubby bathroom and kitchen would be considered an eyesore.

But what was my point? Most people are richer than someone else. What is important is how you use your wealth and possessions. What good will your wealth do you if you live in spiritual poverty?

-the old place the landlord made a fortune on charging me "expat" rent(!)

Well said, Anonymous of this article.

Truthfully, why blame the expats, when it is the poor administration of the country that seems to forget the vulnerable in society?

I think the commentator, "Anonymous #1" saying, "the natives do not deserve it" is rather scurrilous in his/her statement about who deserves what! Guess, some like to play God -- afterall, only the Creator decides who gets what!! Here it is the King of Greater Kailash who after seemingly having problems rose to being a "local millionaire" has no ounce of humility. I wonder if his "charity to dogs" can save his soul? lol
And, no, Anonymous of Greater Kailash -- we do not care to learn of your "myriad problems"! I'd rather ask the woman in this picture who and what brought her to be sleeping penurious on the streets!

@ Rajiv -- Mayank is doing justice to bring forth atrocious acts we dismiss for sybaritic comforts. Afterall, we are not living in paradisical world, by protesting human indignity is our collective responsibility to present, and to incept changes. For how long are we going to continue being improvident to human adversity? Mayank has courage to visit and portray stories of real life events, where some people would have a panic attack visiting some of the places this young man ferociously dares to enter.

Funny how people take it upon themselves to lecture the wealthy on how they should spend their money, what money is all about, etc. etc.

You earned it do what you like with it. And to the lecturers have you heard the quote: those who can't do, teach (in this case instruct others how to spend their money)!

And people who have - you need to stop being embarrassed or ashamed by offering comfort to those who complain. Bark is worse than their bite.

Jess Sikand is a great satire in these comments by adding his/her two ruppees worth! Guilty for being useless in this world Jess Sikand?

Fair viewpoint by the writer.

Jess Sikand is a female from Michigan! UNITED STATES of PROPAGANDA! No kidding she has this view, since her country makes other nations bleed to death.

Hey Soofi, you rock man! Saw your stuff for the first time and will continue reading the blog. Regards from Iran

Personal insults and petty comments only serve to reveal your own wanting character.

Hey guys, what are YOU doing to make the world a better place?

Most people of character do not gloat about their charitable conributions or volunteerism. There is nothing to brag about and there is no need to make a show of it. It is a reward in itself to help your fellow human.

Open your eyes and look at what is being done and become a part of it instead of absolving yourselves by bashing the "rich".

Too right, Jess, too right! It is heartening to find one other person who is not afraid to say it like it is. Everyone else who seems to be around this blog, including its owner, seems to be obsessed with being some sort of a be-nice-to-the-poor-indians person but strangely, I've never come across anyone being actually nice real time to any poor person around this city. These wankers love to wax eloquent about charity and brotherhood and bollocks online, but don't realise that their own tea is probably made and served by a completely underprivileged person. Bloody tossers! And you are so ruddy correct - these people find it easier to go through their lives if they do a bit of rich bashing every morning - they don't even have the balls to either be/become rich themselves, or let the rich be! Bloody middle class wannabe jhola chappal idiots. And Mayank Austen, you can go to hell and climb into your own arse.

p.s above comment to sikand and anonymous #12 is from Za'eem Shujaat

hey what happened to my comment to the two nuts above: Jess and anonymous #12?

I repeat that these two, along with Greater Kailash can all drink their own piss and wipe their s--t with the money their dadd's give them as allowance.
anonymous -- doesn't seen to even have a verterbrae to even insert his name -- but has words of disgust to share.

I bet Jess Sikand's immigrant parents came to America and may have made some dollars and now she thinks she has conquered all but a good brain! LOL

Soofi -- notice how both cowards who like dishing out opinions choose to be discreet by being anonymous -- at least you are brave to document.

Anonymous 12 could also be a girl, Za'eem. But your point taken.

question to Jess Sikand: what are YOU doing to make this a better world? You seem to be a very mean spirit.

Greater Kailash: the fact that you mention we are welcome to learn about your problems, why would we waste our time on insane people?

Yes, I came from highly educated Immigrant parents. Our whole family has been and continues to be highly educated, successful and doing community work. I volunteer locally with education (I'm a PhD)! My husband, a doctor, treats uninsured patients gratis. My great grandfather was an engineer and professor who left his estate in India to his domestics in Kanpur, my grandfathers were one a doctor (who bicycled to the Guru Nanak Charity hospital once a week to help) and one grandfather was in the Indian Army and had to flee Pakistan as a refugee with his family, my father a veterinary doctor, mother a teacher (now volunteers).

Satisfied Mr. Kohli and all you criers? A little ashamed perhaps. I hope so. Yeah, values are within people and all you pathetic middle-class urbanites just cry and cry and cry. Losers, the bunch of you.

Back to my question: WHAT ARE YOU DOING TO HELP YOUR COMMUNITY?

"Most people of character do not gloat about their charitable conributions or volunteerism", she says, but then she (I'm a Phd!) goes on to list her family history (going back generations) of volunteerism and humility.

One finds it hard to fathom all your anger against Mayank when your comments (under your own name!) invite replies. That's what blogs do. Unfortunately, you're being strangled by the very worms you let out of the can, Dr Jess Sikand.