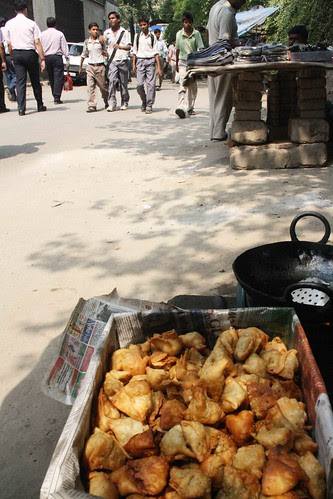 What is Delhi without its ruins? What is a samosa without its potatoes? Boil it, mash it, mix in the spices, scoop it up in a flour patty, deep fry and serve it with tamarind chutney.

But just as there is more to Delhi than its forts, there is more to a samosa than the tuber. A few stalls in Old Delhi’s Chandni Chowk have samosas with peas, only peas. The Muslim quarters in Nizamuddin Basti and Ballimaran have shacks selling keema (minced meat) samosas. The vegetarians gamely opt for a paneer (cottage cheese) filling. Mithai stores such as the Bengali Sweet House in Bengali Market have tiny triangles of golden brown maida crust stuffed with khoya (dried milk).

However, the samosa’s traditional identification in Delhi lies with the potato. The Capital’s biggest sized samosa, aptly called Maha Samosa, is the specialty of Delite, the 1951 circa movie theater on the fringes of the Walled City. You will have to buy a movie ticket to get to the samosa counter. Beneath the crisp shell lies a potato mixture so richly spiced with coriander and cumin that the aroma alone makes you dizzy. Delite's samosas are so popular that the movie-watching crowd makes an advance booking for them to be delivered on their seats during the film interval.

In a bylane near Scindia House, in the shopping district of Connaught Place, vendors sell samosas that are small enough to be passed off as cocktail samosas in the party circuit. The potatoes, cooked with peas and groundnuts, and spiked with cardamom and black pepper, are shoved inside a flour patty within which they guard their flavour as Mughals did their harem women. One bite of it and the samosa is over. But the taste remains with you for a long time. 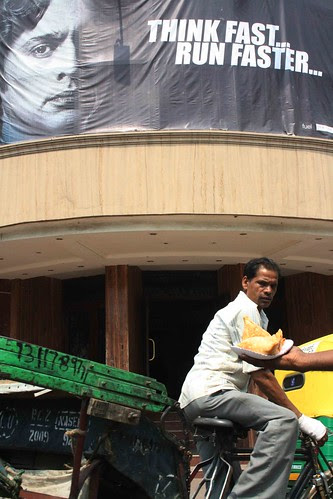 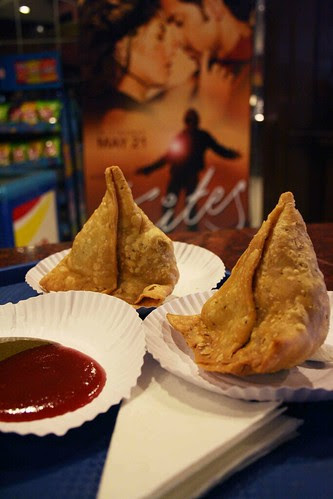 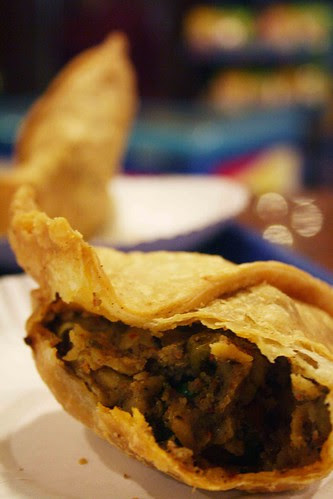 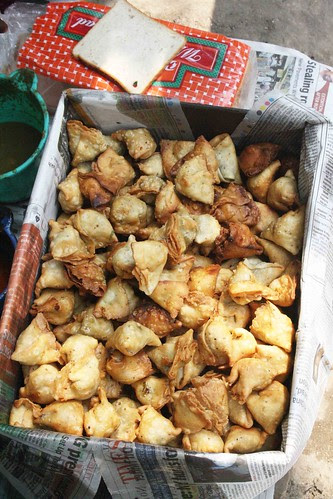 Samosas ready to be deep-fried, on Curzon Road 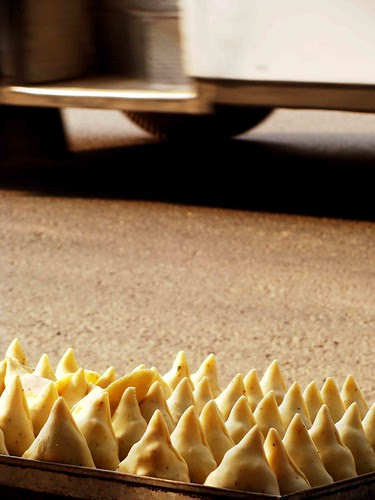 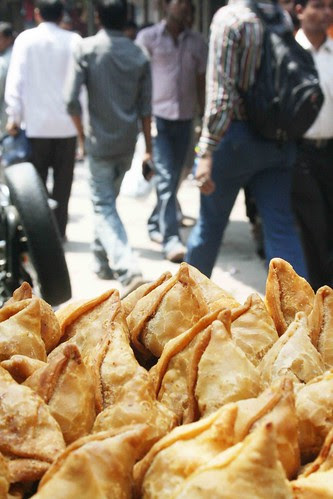 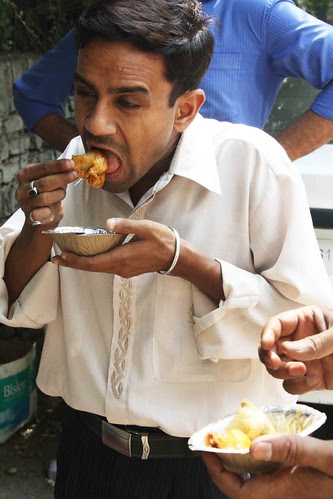 Posted by Mayank Austen Soofi at 6:15 AM

A Ph.D can be done and a thesis can be written on Samosas of Delhi ! You have really touched a raw nerve in Samosa Lovers of Delhi ! Wish you would write about other famous food items of delhi also.

Thanks for introducing to yummy flavors or varieties of Samosas unknown to us, certainly worth trying.

Though it is sad to note that safety and hygiene levels for food preparation, storage and serving are still so unappetizing.

Mayank, why has the frequency of blogging gone down. Mate, keep them them coming please.

I publish a new story after every two days.

Nice post. Has anyone thought of ice-cream samosas yet?

Mayank, I think I will have to get some samosa soon...I haven't had it for a long time....
I like this samosa piece, it is yummy:-)

You have here a very interesting blog. I'd so much like to visit Dehli and experience the remnants of Mughal culture you depict so well. Here in Mauritius we have samosas too though not as big,somewhat more equilateral though. How about the musical tradition and poetry and all that - kathak, qawwali, ghazal, and even, if you allow me, tawaif( as in Pakeezah, Umrao Jaan 1981)...?

Mayank..how come you missed out the famous samosa shop which is in very close vicinity to your rutted Nizamuddin Basti. It beats all the mithai shops that sells samosas...beleive you!

From Ashram come towards Nizamuddin. After the flyover enter left to Bhogal Market and in 150 meters you will find a corner shop at your right called "Kadimi".

It sells Samosas in varied form. Gobi Samosa, Matar Samosa, Dal Samosa, Normal Alu stuffed samosa, Paneer samosa, Palak Samosa...what not! You ask it and you get it..

And yes its hygenic. It looks so. The workers were clad in very clean clothes and everything was safely covered from dust and whatever...

U simply know how to pull out simpler things from "aam aadmi's" life and turn them to a fun read. Samosa's been India's fav. snack since ages. This reminded me that I havent had it for quite some time now, scindia house thing sounds interesting and looks yummy :)
Keep writing!

Not a great samosa afficiando, but when i used to work in an barakhamba road, an evening ritual used to be to go have the scindia lane for the tiny samosas. I used to love them, as they used to have a crispy skin and the sour green chutney used to be excellent. I think they really do good business there - I remember only one vendor sitting in the evening, but recently I saw three sitting on that small service lane behind the bus stop.

Can't stop salivating thinking about them.

Not a great samosa afficiando, but when i used to work in an barakhamba road, an evening ritual used to be to go have the scindia lane for the tiny samosas. I used to love them, as they used to have a crispy skin and the sour green chutney used to be excellent. I think they really do good business there - I remember only one vendor sitting in the evening, but recently I saw three sitting on that small service lane behind the bus stop.

Can't stop salivating thinking about them.

Your neat pictures of the humble samosa ought to put those food advertisers/touch-up guys to shame who use cigarette smoke, fake colours and what not to make food items look appetizing on screen/paper.